This past weekend marked the end of the Santa Barbara International Film Festival. We are so proud to be a sponsor!

Onstage of the Lobero Theatre was opened up for post tribute parties.

Film Maker’s lounge was used all day and then would light up at night for the after party lounge!

Thank you again to everyone at the Film Festival for allowing us to be a part of such a special Santa Barbara Tradition! We can’t wait until next year!! 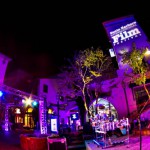 Video: A Wedding In Time-lapse